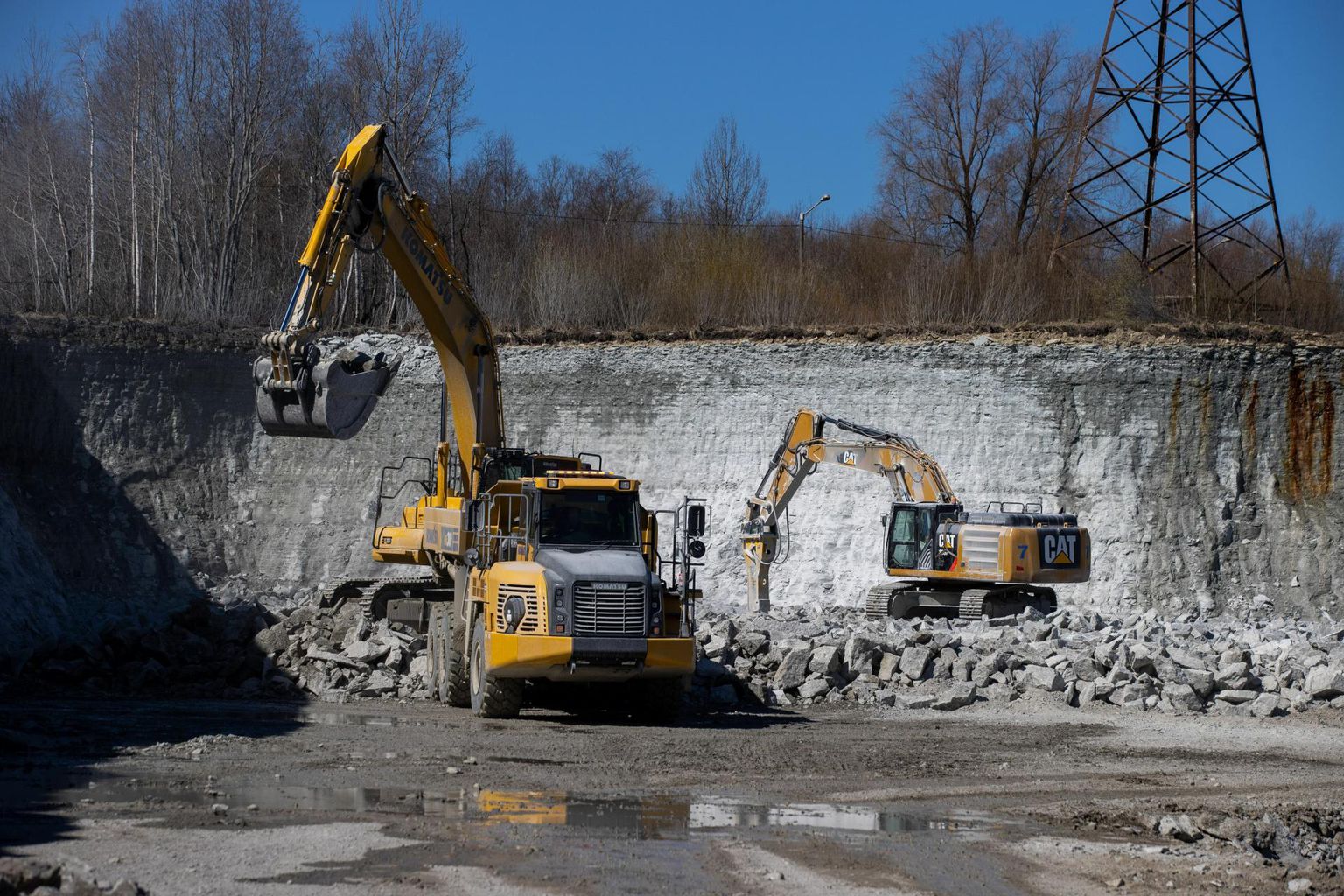 Hard work is still going on in Väo quarry next to Lasnamäe, but the quarry will be exhausted in the next few years. Photo: Tairo Lutter

Hard work is going on in the Väo quarry right next to Lasnamäe; limestone layers are cut into pieces with hammers. Today, instead of blasting, extraction takes place, i.e., the layers are broken open with hydraulic hammers so that raw material losses are as small as possible.

The crushed stone is hauled away with new Japanese Komatsu trucks. «We were lucky; we recently replaced tired Russian technology with Japanese technology», – chairman of the board of Limestone factories of Estonia (LfoE) Vladimir Libman rejoices.

Like most construction materials, also crushed stone has become more expensive this year. «Nevertheless, there are enough customers, and we are covered by orders until the end of the year», – said Libman.

But how does the fact that the Transport Administration froze 50 of this year’s road construction projects due to price increases affect the orders? According to CEO of LfoE Kuldar Õunapuu, the canceled objects of 2022 is rather of regional importance and may have a greater impact on their company’s operations in the second half of the year and significantly more in the coming year.

In order to increase export, the Saaremaa Company merged with Paekivitoodete Tehas, and a new factory will be built

LfoE was formed in April when Paekivitoodete Tehas and Saare Dolomite-Väokivi combined and now it is planning to export limestone products from the Väo quarry. The company from Saaremaa has been the largest natural decorative stone producer in Estonia, whose production volume exceeds the needs of the Estonian market nearly five times. If in the past their main market has been Russia, where for example 61% of their turnover went before the pandemic, then already last year almost 60% of their dolomite goes to Sweden.

According to the head of the Saaremaa Company Hindrek Auväärt, the merger gives them access to Väo’s limestone reserves. Limestone is currently transported from Väo to Saaremaa, where it is cut into tiles and other products. Since the transportation of raw materials to the island and the transportation of finished products back to ship them from the mainland to Scandinavia are expensive, a limestone processing plant will be built in Lasnamäe within five years at the latest. In Saaremaa, dolomite will be extracted further, and it is also processed there.

The company predicts that in about four years, the crushed limestone will become scarce in Harju County because the quarries of Harku and Väo Paas OÜ will also start to run out. Opposition to the construction of quarries is high everywhere around the capital, but if the crushed stone has to be transported further away, it will bring a noticeable price increase. According to Vladimir Libman, it is expedient to transport crushed stone for construction from a radius of 30-50 kilometers because otherwise, the price will be several times higher.

Full version of the article: https://majandus.postimees.ee/7528561/killustikust-saab-pealinna-lahistel-defitsiit-kuid-uut-karjaari-keegi-oma-tagahoovi-ei-taha