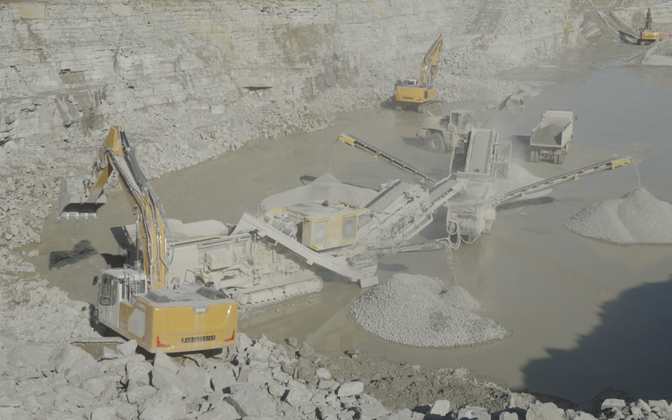 If Estonia were to fulfil its obligations to the European Union and starts building four-lane roads and Rail Baltic both with the aim of completing these by 2030, a deficit of local construction minerals becomes evident in just a few years. To implement the infrastructure projects that are economically and in terms of security important for Estonia, new quarries must be opened in the nearest future for the extraction of construction minerals, says the National Audit Office in its report published today. In addition, steps to alleviate the disturbance caused by the extraction, and compensation for damages to local residents should be proposed more actively.

«Estonia would be saved from a deficit of gravel, sand and limestone only by its incapacity to launch the construction of Rail Baltica and by the fading away of the road construction activity», -Auditor General Janar Holm said when commenting the results of the report. «Given the National Audit Office’s earlier audit reports indicating the drying up of construction investments in the road management plan and the delays in railway construction, this is rather likely. But even with that, it is clear that the quarries currently in use are becoming exhausted and new ones need to be opened».

Estonia has promised to complete the Tallinn-Tartu-Luhamaa and Tallinn-Pärnu-Ikla roads under heightened requirements by 2030. The high-quality construction limestone suitable for building roads is primarily found in the limestone deposits in Harju County, where the current supply lasts until 2026 at most. The sand and gravel supplies in Pärnu and Rapla counties are also at a critical level – in the event of the construction of large infrastructure projects, especially the Rail Baltica railway line, the extractable supplies there would also be exhausted before 2030. Building the Rail Baltica railway line only, should it be launched, would raise the need for construction minerals between 2023 and 2028 by more than 2.3 million cubic metres compared to the volumes of 2022. In 2022, about 9 million cubic metres of construction minerals are used, whereas by 2027, the construction of roads and railways would raise this volume to 13 million cubic metres annually.

The National Audit Office is in the opinion that Ministry of Economic Affairs and Communications should develop alternative solutions for substituting construction minerals in the event that local quarries are unable to cover the needs for some reason or their opening are delayed. The Ministry should also assess the potential effects of the exhaustion of the quarries and the delays in opening new ones. Although the Ministry is aware that in the case of the construction of large infrastructure objects, the need for construction minerals would increase rapidly in the coming years compared to the extraction volumes of previous years, it has not sufficiently prepared for this situation.

It should be specified to which extent it is possible to reduce the need for the extraction of construction minerals by introducing alternative construction materials such as extraction, construction, and demolition waste, as well as by adopting new technical solutions. The construction prices of large infrastructure projects should in that case also be assessed.

Therefore, it is important to first pay attention to the optimal use of local extraction opportunities.

The National Audit Office points out that the opportunities for using the supplies are not precisely known and it is therefore difficult to estimate the security of supply. Most of Estonia’s construction mineral supply has been recorded based on the now expired exploration procedure and the resulting quality requirements. Some of the mineral resources that were registered as active consumption supplies may not actually be extractable (for nature conservation reasons etc.) and therefore the supplies suitable for extraction may be registered larger than they actually are. The Environmental Board relies on the quantities of construction minerals extracted in the past upon assessing security of supply during the process of processing extraction permits and only asks for the opinion of the MEAC regarding the state’s interest if it expects a potential sudden change in the future demand for construction minerals in some regions.

According to the National Audit Office, the assumption for the assessment of the security of supply that the maximum transport distance of construction minerals should remain within the range of 50 kilometres is no longer sufficiently justified. In the emerging situation of the deficit of construction minerals, it would be reasonable to consider the supplies located further away, and their impact on ensuring the security of supply.

The Ministry of the Environment should develop a systematic approach to miners, so that open quarries and quarries to be opened can be exhausted and quickly reclaimed within the optimal and agreed time. Also, more effort should be put into alleviating the disturbances caused by quarries and into making sure the disturbances would be as brief as possible. In order to reduce the disturbances, good practice has also been used in Estonia where, for example, limiting the working hours of the quarry, regular cleaning and washing of the quarry exit routes, and dust monitoring have been agreed upon. This would also provide a clear time perspective and bring some clarity for the municipality and the local residents and would help reduce the opposition to the extraction activities.

The Ministry of the Environment and the Ministry of Economic Affairs and Communications should put more effort into balancing out the interests. The opening of new quarries requires much more extensive and efficient cooperation from the Ministry of Economic Affairs and Communications, the Ministry of the Environment and the municipalities than has been undertaken so far. During the consultations for extraction permit prior to the construction of a quarry, the most reasonable solutions should be sought by listening to substantive and constructive proposals on site. One option would be to pay compensation to those who are the most affected by the disturbances. The interest of municipalities in opening new quarries could be increased through a fee for mining rights. Guarantees should be established so that the state would not have to spend money on the reclamation of quarries, for example, in case of the bankruptcy of a mining company. These steps would hopefully help to prevent the non-constructive so-called not-in-my-back-yard effect in the process of opening quarries and the decision-making process of extraction permit.